This website does not support Internet Explorer, We recommend Edge or Chrome.
City Home PageGovernmentBoards and CommitteesHistoric and Landmark Preservation CommitteeHistoric Families of ChesterfieldWunderlich Family

The Wunderlich family was an asset to the Chesterfield community from 1965-2007.  Terry Conway Wunderlich was a descendant of Chesterfield’s pioneer Joseph Conway through his son Samuel Conway.  She was a St. Louis native, who grew up in the Brentwood area.  She attended Brentwood High School and Washington University.  Occasionally, her father would take her to the Bonhomme Presbyterian Church on Conway Road and to visit the Conway Cemetery.   At the cemetery, Terry’s aunt conducted a Daughters of the American Revolution (DAR) ceremony honoring Joseph Conway.  In spite of Terry’s Presbyterian ties, her mother raised her to be a devout Catholic.

Terry’s husband, William P. Wunderlich (1936-2007), was also born and raised in the St. Louis area.  He attended Chaminade College Preparatory High School and St. Louis University.  They married in 1962 and had two children, George and Kate.  In August, 1965 the Wunderlichs moved to White Plains Subdivision in Chesterfield, Missouri where they lived until Terry moved to Maryland sometime after Bill’s death in 2007.  They quickly became very active in the community.  Both Terry and Bill taught Sunday school at the Ascension Church for over 25 years.  In 1991, Bill was ordained a deacon in the Catholic Church and served the parish for the rest of his life.  He was also active in the Knights of Columbus.  Bill played a significant role in the Boy Scouts and became the unit commissioner as his son moved up in the Scouting ranks.   Terry worked with the Girl Scouts as scoutmistress and district chairwoman while her daughter was a scout member.  Terry was also a member of the DAR.  Bill and Terry shared a love of history and they found a variety of outlets for studying, preserving and sharing it.  They also passed their enthusiasm for history to their children.

After their move to Chesterfield, Bill served as the president of the Creve Coeur/Chesterfield Historical Society.  When Chesterfield incorporated in 1988 and created the Chesterfield Historical Commission, he and Terry became members.  Bill was elected vice chairman of the Commission at the time that Jane Durrell served as Chairperson.  Later Bill and Terry became co-chairs of the Commission and created a book committee to research and write a history of the Chesterfield area.  In 2002 they were named Chesterfield’s Citizens of the Year.  As historical enactors, Bill and his son George participated in Civil War battles and mountain man events.  The Wunderlichs gave school talks about Chesterfield’s history while dressed in 19th century outfits.   Terry also conducted tours of Governor Bates’ home in Faust Park. Terry gave tours of Governor Bates’ home  One summer Kate worked at Faust Park sorting Indian artifacts.  These adolescent interests inspired George to obtain a masters degree in history and Kate to become an archaeologist.  George later served as the Executive Director of the National Museum of Civil War Medicine in Frederick, Maryland.

The Wunderlich’s love of country and community was best exemplified by their Fourth of July parades.  Every year for over 30 years, Bill would put out a British flag on July 3.  At 9:15 a. m. on July 4 friends and neighbors would gather at the corner of White Plains Drive and Fox Hunt, where children, dogs, bikes, tikes, red wagons, and strollers decked out in patriotic trappings would parade through the subdivision to the Wunderlich home.  Bill would conduct an arms ceremony and replace the British flag with the Stars and Stripes.  A moment of silence and prayer was followed by the Pledge of Allegiance, then ribbons and prizes were awarded for the most patriotic or colorful decorations.  The serving of donuts, coffee and Kool-aid concluded the affair.

Bill and Terry Wunderlich witnessed tremendous changes in Chesterfield between 1965 and 2007.  However, according to Terry, the “friendliness, neighborliness and casualness remained.” 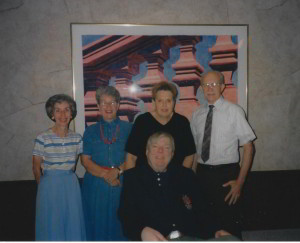 CHLPC archives.
Jane Durrell’s recollections given to Ann Chrissos on 22 May 2019.
Terry Wunderlich was interviewed by Arland Stemme on 30 August 2007.
West Newsmagazine, Citizens of the Year, 12 March 2003.