This website does not support Internet Explorer, We recommend Edge or Chrome.
City Home PageGovernmentBoards and CommitteesHistoric and Landmark Preservation CommitteeHistoric Families of ChesterfieldEatherton Family

Chesterfield’s nineteenth century pioneers included the Eatherton family. They came to the United Sates from England and they settled in Spotsylvania County, Virginia.  William Eatherton (b. 1807, d. 27 July 1891) married Frances Pendleton (b. 1814, d. 1856) on 28 June 1830. Nine years later, they moved their family to Orrville, Missouri which was part of the Chesterfield mail route. William purchased a farm and house at 18332 Wild Horse Creek Road from the Tyler family, who were related to President Tyler. He used slaves he had brought with him from Virginia to work it. The house had two stories, a native stone basement and it measured 25 feet by 36 feet. The basement had two fireplaces, each of the four rooms on the first floor had a fireplace and there were two fireplaces for the four second floor rooms. All of the fireplaces were built of brick. The exterior of the house was covered in walnut siding and walnut was used in the interior for trim, wainscot and chair rails. The style of the house, Tidewater Maryland, was quite unusual for Missouri structures. William and Frances raised their nine children in this house. Their son, James Robert (b. 10 May  1830, d. 28 March 1901) was born in Virginia, but he grew up in the Chesterfield area.

James married Martha Jane Ball on 22 Sept. 1852. She was the youngest daughter of John and Mary Ball, for whom the city of Ballwin is named. They lived on Laurie Lane off of Wild Horse Creek Road, where they raised nine children: Alexander; George; Charles (b. 21 March 1858, d. 2 March 1915); Frances Mary; John Ball; Lourena; Robert E.; Emma; and James. James Eatherton, along with Mr. Eickerman and Mr. Woolsey of St. Louis, spent $32,000 to build a mill for grinding wheat and other grains. It operated for about a year, and then in 1868, it burned down and was not rebuilt. According to family lore, James always wore a white shirt to work and liked to visit with each farmer before starting the grinding. However, the German farmers became disgruntled with this practice since it caused them to wait for his services. James and his family were members of the Bethel Methodist Church in Pond, Missouri.

A few months before his death, Charles’ son, Thomas married Christine Albrecht (b. 13 March 1892, d. 2 Feb. 1951) on 1 October 1914 at St. Thomas Evangelical Church in Gumbo, Missouri. They lived in the home of Thomas’ great-grandfather, William Eatherton, at 18332 Wild Horse Creek Road. The home was a wedding present. Thomas and Christine had seven children: Helen Lena; Fred August; Thomas Charles; Linley Albert; Herbert Christian; Ruth; and Martha Jane. Thomas continued his father’s hauling business and farmed with the aid of horses and mules. He also raised cows, pigs, chickens and ducks to provide food for his family. His wife Christine planted a large garden every year, cultivated fruit trees and canned much of the food she produced. The farm had a variety of buildings which included a privy, a smokehouse for curing meat and a wash-house. The latter was equipped with a stove to heat the water to boil the underwear, handkerchiefs and baby clothes. During the Great Depression Thomas and Christine Eatherton lost their hauling business and their home. For a while, Thomas found work with other hauling businesses and during World War II, he also became the caretaker of Antioch Baptist Church.

Thomas’ and Christine’s daughter Helen and all of Helen’s siblings attended Orrville School. It was a one room schoolhouse with fifty students and the same teacher who had taught Helen’s father. During the winters, the older boys were responsible for feeding kindling to the stove. All the students walked to school and played together at recess. Helen likes to recount the story of when one of her brothers decided to take a short cut to school, crossing a fenced pasture.  Unfortunately, the pasture held a nasty bull that chased the brother back to the fence. The incident terrorized the Eatherton children and they decided to never tell their parents about it. On 28 August 1934, Helen Eatherton married Joseph Daniel Cahan (b. 27 Mar. 1909, d. 15 Mar. 1977) in Waterloo, Illinois. They married again in the Most Holy Rosary Catholic Church in St. Louis on 31 January 1937. They had four children:  Mary Christine, Patricia Ann (b. 19 Nov. 1939), Ruth Marie and Joseph Thomas. They lived near the water tower on Grand Avenue in St. Louis. Joseph worked as a plasterer, and during World War II, Helen was employed at the Small Arms Plant on Goodfellow. After the war, she worked at Sears and then in the City of St. Louis Collector’s office. In 1955, the Cahan’s moved to Webster Groves, where Helen eventually retired as secretary to the St. Louis County Parks Commissioner.

Since Helen worked full-time, during the summers her children stayed with their Eatherton grandparents , Thomas and Christine, in Chesterfield. Patricia (Pat) recalls that they liked to play with the dogs, pigs and chickens, to make mud pies and to help Uncle Charley Kroenung pick berries. She also helped her grandmother do the laundry in the wash-house where a washing machine had replaced the wash tub and stove.  The farm included a barn with a swing, a tool shed, cisterns, a well, hen house and ducks as well as a kitchen and a garden with apple and peach trees.

The Eatherton family has had a long and productive association with Chesterfield.  They are one of the pioneer families who have moved Chesterfield from an untamed wilderness to a thriving municipality.
Christine Eatherton’s family, the Albrechts and the Schaepers, also had a long association with the Chesterfield area. August Albrecht and his wife, Johanna Schaeper Albrecht, were neighbors of the Eatherton family. They had three children:  Christine Caroline, Fritz and Gottlieb. One morning, Johanna went out to feed the pigs and one of them bit her in the stomach. This injury resulted in her death. With the loss of his wife, August took to wandering. Johanna’s sister and brother-in-law, Lena and Charles Kroenung, with help from the children’s maternal grandmother, Christina Schaeper, took the children in and raised them in a stern, German environment. For example, when Fritz misbehaved at the dinner, he was told to take his plate and eat on the floor with the dogs. Another Fritz story is about his World War I experience.  When he received his orders for overseas deployment, he threw a note to field workers from his train window with the date and train number when he would be passing through Union Station in St. Louis. The field workers took the note to his sister Christine and she, with her husband Thomas Linley Eatherton and their daughter Helen, made a mad dash to Union Station. They saw Fritz leaning from the train window waving to them. Later, Fritz was injured in the Battle of the Argonne Forest and given a medical discharge. After the war, Charles Kroenung was one of the first people in the Chesterfield area to acquire an automobile, a Willy’s Overland. He lived at the corner of Wild Horse Creek Road and Monarch Hill (Hwy 109). If a new car could make it up Monarch Hill it was considered to be a good car. After the war, Charles and Lena took Helen on an outing to see the busy and beautiful Union Station in peacetime. Helen remembers the car had shades on the windows that could be rolled down and scratchy horse-hair seats. She also recalls when the Missouri River flooded Gumbo (Chesterfield Valley), cut a new channel and took Grandma Schaeper’s house.

Grandma Schaeper, (Christina  Wilhelmina Nollmann, b. 5 Aug. 1856, d. 24 Apr. 1924) met her future husband, Heinrich Schaeper (b. 23 Mar. 1842, d. 2 May 1888), when he worked as a stable boy on her father’s farm in Germany. Her parents refused to let her marry Heinrich because he was beneath their social status. The couple left Germany around 1868, traveling with different groups. They reunited in St. Louis, where they married and purchased land in Gumbo, Missouri. Although Christina’s siblings corresponded with her, her parents disowned her. She and Heinrich had five children: Johanna, Anna, Christina, Frederick H. and Lena. The last were twins who never knew their father because he died from heavy drinking before they were born. As a widow, Christina managed the farm and became active in the St. Thomas Evangelical Church of Gumbo. Heinrich and Christina are buried in the Arminia Lodge Cemetery on Olive Boulevard in Chesterfield. 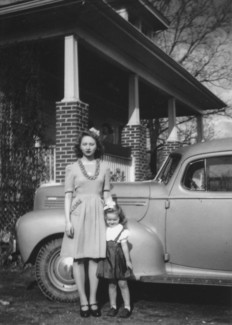 Patricia Cahan Misuraca and Janis Wall Misuraca were interviewed by George and Ann Chrissos on 31 Aug. 2016.