This website does not support Internet Explorer, We recommend Edge or Chrome.
City Home PageGovernmentBoards and CommitteesHistoric and Landmark Preservation CommitteeHistoric Families of ChesterfieldHistoric Photos - Veterans

By Ann Chrissos
Many of Chesterfield's residents have shown their patriotism through military service.  Joseph Conway, an early settler to the Chesterfield area, served in the American Revolution and Indian Wars before moving to Missouri.  As a resident of Bonhomme (Chesterfield) from 1796-1830, he returned to the military as a captain in the War of 1812.  Colonel John S. Ball, another veteran of the same war, moved his family to Bonhomme upon completion of his service in 1815.  Captain William Tyler, a slave owner, arrived in the Chesterfield area in 1837.  When the Civil War broke out, he enlisted in the Confederate Army.  He died in 1864 in Virginia.  A marker honoring Spanish American War veterans can be found in Gumbo Cemetery.  When the United States entered World War I in 1917, Fritz Albrecht, who lived on Wild Horse Creek Road near Highway 109, enlisted in the army.   When he received his orders for overseas deployment, he traveled by train from Fort Leonard Wood to Union Station in St. Louis.  As the train passed through Gumbo Bottoms (Chesterfield Valley), he threw a note from his train window with the date and train number to field workers, who took the note to his sister Christine. She, along with her husband Thomas Linley Eatherton and their daughter Helen, made a mad dash to Union Station.  They saw Fritz leaning from the train window waving to them.  Later, Fritz was injured in the Battle of the Argonne Forest and given a medical discharge.  Other Chesterfield veterans of World War I included Edward Rikard, Walter H. Koebel and Ernst V. Hill.  After the United States entered World War II in 1941, most of Chesterfield’s young men joined the military.  The labor force declined so much that the area farmers were forced to use POWs to work the fields. Besides those pictured below, some additional World War II veterans are:  Donald W. Frommer, Walter V. Buford, Norman C. Albrecht, Roy Eisenhardt and Earl Bayer.  Bayer served as a gunner on a B17 Flying Fortress. He flew 25 combat missions from England to France.  He was wounded over France on July 4, 1943, but returned to flying duty as soon as he recovered.  Chesterfield residents continued to join the military during the Korean and Vietnam Wars.  The Korean War veterans are being honored in a special display at the Chesterfield Heritage Museum in Chesterfield Mall.  Vietnam veterans included members of CHLPC Michael Kane and Stan Dampier, as well as Mayor Bob Nation, John H. Deuser, Jr. and Charles Fine.  Military service by Chesterfield residents continue to the present day.  Their service is honored and greatly appreciated.

For more information about Chesterfield veterans see the display at the Chesterfield Heritage Museum or go to http://www.chesterfield.mo.us/historical-commission.html. The museum welcomes donations related to Chesterfield history as well as antiques for the resale shop. 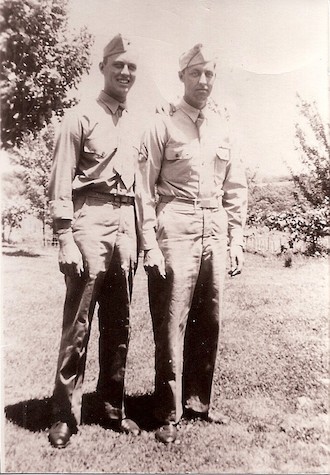