In 1882, Philip A. Fick married Charlotte L. Koewing.  She was the daughter of Frederick (1820-1869) and Sophia (d. 1873) Koewing. The Koewings lived on “Fairwind Farm” in a large house built in 1885, which was located at 17802 Wild Horse Creek Road, Orrville, Missouri.  Charlotte’s sister, Eliza and her husband, Rudolph Essen Sr., inherited the Koewing home.  Essen was a farmer in Orrville while Philip and Charlotte Fick ran the general store in the same village.

Philip and Charlotte Fick had five children:  Albert (Ollie) (27 Nov 1892 – Sept 1956); Andrew, Roy, Harris and Sophie.  At the age of 20, Harris drowned in Orrville Creek while he was running traps.  Sophie married Jake Calvert, who worked for the water company in St. Louis.  Their daughter, Melvina Calvert Schworm, was a talented artist.  Some of her paintings of St. Louis landmarks were owned by her cousin, Lelia Fick Headrick, a Chesterfield resident.

Lelia was the only child of Albert and Elsie Ficke Fick (13 Jan 1897 – Nov 1962).  Elsie Ficke and her sister Augusta M. Ficke were the daughters of Walter S. and Mary Schulz Ficke, who married in 1896.  Mrs. Mary Ficke inherited her childhood home from her father, Frederick G. Schulz (d. 1894).  Schulz acquired land along Wild Horse Creek Road from Amazon C. Howell and Samuel C. Tyler.  In 1850, he built a large house at 18217 Old Wild Horse Creek Road.

Albert, Elsie and Lelia attended St. Thomas Evangelical & Reformed Church in Gumbo.  When the congregation outgrew the small white church, a new church was built on a hill along Wild Horse Creek Road.  Elsie Ficke Fick sold property for the new church’s driveway and Sophie Fick Calvert sold the land for the church.  Lelia grew up on the Fick Farm on which an Indian Mound was located.  Her father, Albert, and his siblings frequently played in the mound.  Lelia attended Orrville Elementary School and one year at Eureka High School.  In 1943, her family moved to Olivette, Missouri to live on 13 acres at Olive and Dielman Road.   She graduated from University City High School.

During World War II Lelia remembered the German Prisoners of War on the Hellwig Farm.  Area farmers, including her dad and uncles hired them to work in the fields.  The Ficks found the POWs to be generally friendly and hard workers.  In 1954, the Albert Fick Family returned to their Chesterfield property.  They sold it in 1994.  At that time the State of Missouri declared the Indian Mound to have historical significance and required that one acre surrounding the mound could not be sold.  Miramont Subdivision and Barat Academy now occupy what was the Fick farm.

Lelia Fick married James Headrick in the Samuel United Church of Christ.  Lelia was a longtime employee of the Parkway School District.  After she retired, she performed volunteer office work at Shenandoah Vally Elementary School and in the St. Luke’s Hospital Medical Library. 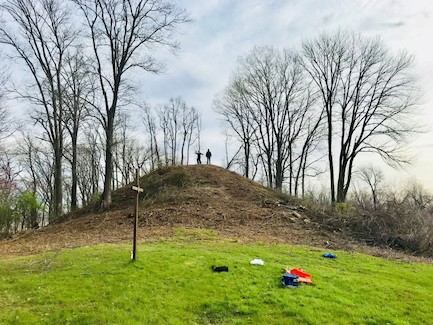 Indian mound which was located on the Philip A. Fick property. 2018  Photo, courtesy of Mark Leach.