This website does not support Internet Explorer, We recommend Edge or Chrome.
City Home PageGovernmentBoards and CommitteesHistoric and Landmark Preservation CommitteeHistoric Families of ChesterfieldHowell's Landing

Prior to the construction of the Daniel Boone Bridge in 1937, the only way for Chesterfield residents to cross the Missouri River was by ferry.  Lewis’ Ferry took travelers from the end of Olive Street Road at Eatherton Road to Weldon Springs in St. Charles County.  John Lewis owned 420 acres in the area of present day Faust Park.  In 1810, he sold the property to Frederick Bates. When Bates was elected the second governor of Missouri in 1824, he rode his horse to Lewis’ Ferry, stabled the horse near the landing and road the ferry across the river where he kept a second horse.  He then rode to the state capitol, St. Charles, to conduct business.

In 1853 (*) James Howell, the owner of a large tract of land in St. Charles County, purchased Lewis’ Ferry and property in Bonhomne Bottoms.  He established a settlement known as Howell’s Landing.  Later the name of the Landing changed to Centaur. Some of the early residents of Howell’s Landing included William Tyler, Martin Boisselier and Thomas Bayer.  All of these men farmed and Bayer also owned a blacksmith shop.  Today, Howell’s name is associated with an island of three thousand acres on the south side of the Missouri River Channel.  This island was first recorded by Lewis and Clark in 1804.  At that time it was only 400 acres and was located on the north side of the channel.

Anton Leiweke purchased the island in 1900 which he cleared and farmed.  He also acquired the ferry business and carried farmhands and supplies to the island on barges pushed by a small vessel named the “Honeybell.”  Prior to the flood of 1903, wild turkeys and other wildlife abounded on the island.  The turkeys became scarce after the flood.  Later the deer population increased considerably until the flood of 1951 depleted their numbers.  Sometimes domestic cattle swam the channel to Howell Island where they formed herds of wild bovines.  Between 1905 and 1931, the herds were hunted as dangerous animals.  In 1931, the last seventy-five head were rounded up.

A boat camp, which housed German Navy POW’s, docked at Centaur in 1945.  In four months the prisoners built a causeway to Howell Island and repaired the levee.  Then Harold Hill bought the island in 1953 for $80,000.  Twenty-five years later, it was purchased by the Missouri Department of Conservation.  The causeway is frequently under water and the entire island was submerged in the Great Flood of 1993.   However, in dry times the island offers biking and hiking trails, along with limited hunting and fishing.  On November 2, 2015 a family of three, including a man, a pregnant woman and a four-year-old child, went to the island to enjoy the great outdoors.  Unfortunately, they became disoriented and could not find their way off the island.  They called for help and water and air support were used in the rescue.

Although Howell Island no longer needs a ferry to get to it, it continues to be a destination for rugged individuals.

*Some sources claim it was John Howell or Thomas Howell who acquired Lewis’ Ferry.  James Howell owned and operated a general store in Weldon Springs.  Howell’s Cemetery near Weldon Springs is also named for him. 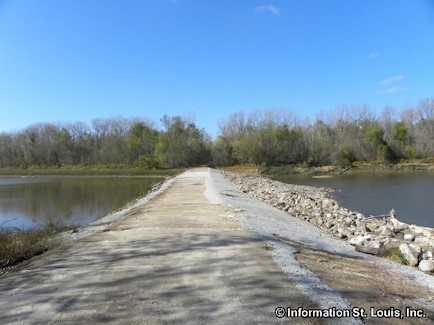 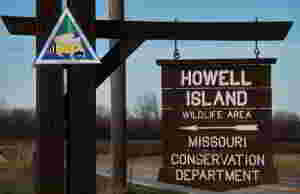