This website does not support Internet Explorer, We recommend Chrome.
City Home PageGovernmentPublic WorksWhen it Snows

The City of Chesterfield’s Department of Public Works is responsible for snow and ice removal on all City maintained streets.  The City’s primary goal in responding to winter weather is to provide reasonably safe and passable streets.

· The City of Chesterfield addresses all other public roads within the City limits.  This includes 176 centerline miles of roadways.  The City cannot salt or plow St. Louis County or MoDOT roads, nor can it address private roads or private parking lots.  In order to properly treat and maintain its roads, the City of Chesterfield has divided its roadway network into nine zones, referred to as “Snow Maps.”  Each Snow Map contains approximately 19.5 miles of City streets.

Prior to each winter season, the Fleet Maintenance Division of the Public Works Department preps all of the City’s trucks, snow spreaders, and snow plows.  All City maintenance personnel (including Streets and Parks) are divided into two crews, referred to as Crew A and Crew B.  When snow operations are implemented, these crews work alternating twelve-hour shifts.  This ensures adequate snow fighting personnel are available and properly rested at all times.

The streets within each Snow Map are classified as Primary or Secondary.  Secondary streets are typical subdivision streets, commonly referred to as local roads.  Primary streets are those streets which have been specifically identified by City Staff (and approved by City Council) as collector roads or roads with high levels of traffic.  City Staff has also identified a list of locations that are specifically hazardous due to grade, drifting, freezing, lack of shoulders or curvature.  These are commonly referred to as “Priority Roads.”

There is no such thing as a typical storm.  Each storm presents its own unique challenges with intensity, traffic, timing, temperature, moisture, and duration.  Public Works management staff closely monitors future forecasts, salt storage, and equipment conditions as the supervisors make individual decisions on when to spread salt and what application rate to use.  Snow fighting involves substantial planning and many components.  It is certainly more complicated than dropping a plow and driving.

During most storms, our first priority is to treat the Primary streets and the Priority roads.  We will typically mobilize our response prior to the actual start of any winter precipitation.  If the event does not begin as a rain event, we will generally pre-salt the streets.  We do this to try and get a thin salt layer on the pavement to prevent the snow and ice from bonding to the pavement.  We first pre-salt Primaries and Priority Roads, and then make a decision as to whether we should pre-salt the secondary or subdivision streets.  During pre-salt operations, without dropping a plow, our drivers can typically salt the streets in four to six hours. 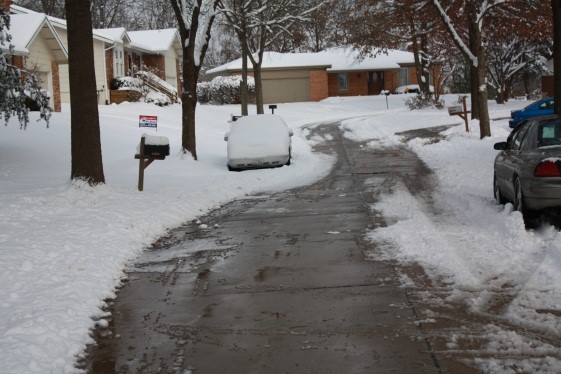 As the snow begins to accumulate, we transition from a pre-salt routine to full scale snow removal operations.  Plowing begins on Primary and Priority roads.  Note that once plowing operations start, the pace of the operation slows dramatically.  A much higher degree of care is required and a tremendous amount of damage can be done by a snow plow traveling too fast.

Once the Primary and Priority streets are in reasonably good condition, or if traffic makes concentrating on Primaries ineffective, we begin "opening up" our Secondary streets.  “Opening up” simply means that an operator makes a single pass down the street, the width of one plow blade, at the center of the street.  The driver progresses continuously, without backing up or attempting to clear snow from cul-de-sacs, islands. or intersections.  On some streets, there will be a path going in, and a path coming out.  On other streets, there will only be one path because the driver does not need to re-trace the route to progress through the map.  Once again, realize that this initial "opening up" occurs while the snow continues.  So, while a plow may have opened up a street early in the storm, it will frequently cover back over and appear as if it were never touched by a plow if the snowfall continues.

As the storm dictates, a driver may be directed to leave the Secondary streets and return to address the Primary or Priority roads multiple times during the storm.  As each truck leaves their prescribed route to either 1) return to the Primaries, 2) return to the Public Works Facility for fuel or salt, or 3) has an equipment failure, they note the location they had progressed to within their map, so that they or their shift replacement can re-start where they left off.  Communication is critical, frequent, and continuous.  Typically, it is very difficult to get completely through the full route to “open up” during any single 12-hour shift.

Once the snow stops, the operation continues, realizing that we now have to “re-open” all the streets that we had “opened up” previously, while the snow was still falling.  At this time, depending on traffic, time of day, and weather conditions, it may be prudent to address the Primary or Priority streets to clear them curb to curb.

Once we have opened, and/or re-opened the entire 176 miles of streets, we begin to clear the streets of snow.  Basically, in the first pass of this phase, we attempt to get one full plow width on each side of the centerline of the street.  In essence, we are creating two lanes on each street.  During this phase, there will still be triangular wedges at intersections, snow in front of cul-de-sacs, and windrows of snow as the plow turns from one street to another.  More than one pass through a route may be required during the “Push Back” process, depending on the depth of the snow, width of the street, and the effectiveness of the prior processes and weather.

It should also be clear that although we plow, that does not necessarily mean the pavement is clear or clean.  If it is a wet snow, typically we can plow down to bare pavement.  But if it is cold, dry, or icy we may leave a layer of snowpack or ice.  Decisions are made to salt more extensively to break up the snow or ice depending on a variety of factors.

Once we have completed the “push back” operation, we move into a “clean-up” mode.  Clean-up mode is the slowest and most laborious effort in the process.  During clean-up operations, trucks push the snow closer to the curb, clear the snow from the corners and centerline at intersections, push the wedge of snow at the front of cul-de-sacs into the island, clear snow around the inside curb of cul-de-sacs and clear entire traffic lanes.  There is an extensive amount of stopping and backing of the plow trucks.  During this phase, crews go back to areas where parked cars did not allow snow to be plowed, and residents or business owners have plowed snow from driveways into public streets, Clean-up operations of even a moderate storm can take multiple shifts and\or multiple days depending up the weather and the amount of snow.

The important thing to remember about the clean-up operation is that what is left on the pavement is the canvas for the next snow event.  Accumulated snow in the curb line affects delivery of mail, collection of trash and recyclables, and with repetitive storms, traffic lanes are narrowed. 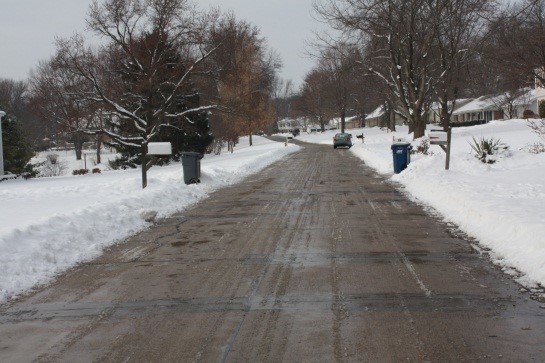 Once clean-up is complete, the City will remove windrows from the driveway approach (in public right of way) of properties which have qualified for the windrow removal program.  These residents must have a qualifying medical condition which does not allow them to clear their own driveways.  Residents can sign up for this by contacting the Public Works Department in advance of the winter season.  There are currently 220 residences which have signed up for the windrow removal program.

Do you qualify for our Driveway Apron Snow Removal program?


A few things residents should keep in mind during snow events:

1)   Keep your distance from the snow plow trucks.  Please give the truck drivers room to operate.

2)   Parking is prohibited on designated snow routes during snow events of two inches or more.  Additionally, parking in any manner which restricts access of snow removal trucks (i.e. parking on narrow streets or cul-de-sacs) is illegal.

3)   Please do not let children play in the snow adjacent to streets. Especially do not let them dig tunnels or hide in snow banks.  We never want to see any child harmed during snow removal operations.