This website does not support Internet Explorer, We recommend Edge or Chrome.
City Home PageGovernmentBoards and CommitteesHistoric and Landmark Preservation CommitteeHistoric Families of ChesterfieldPostal Villages-Part 2

The community of Lake on Olive Street Road at Hog Hollow Road received a post office in 1871. The village was founded as Hog Hollow in the 1850s, but was officially renamed Lake in 1872.   It was 18 miles from St. Louis and a mile marker was located in front of the Post Office.  From 1880-1905, the post office was housed in the Schaeper-Zierenberg General Merchandise.  Postmasters included Charles H. Steinfeldt (1871-1872), Herman Schaeper (1880-1893), Anna W. Schaeper (1894-1897), and Ernst W. Zierenberg (1900-1905).  Anna Schaeper was only one of four females to hold the postmistress position.  The others were Ann Hinze also of Lake, Pearly B. Gray of Bellefontaine and Frances Leiweke of Centaur.  The Post Office closed in 1905 and was transferred to Bellefontaine.  Zierenberg’s store and post office also housed a hotel, blacksmith shop, ice house, community center and later a service station.  A one room schoolhouse was located in Lake as well.

Gumbo, named for its rich silty soil which turned into Gumbo mud when wet, was the next village to acquire a post office.  The community centered at Olive Street Road and Long Road.  The Post Office operated from December 26, 1882 until April 15, 1907.  While Henry Wetzel served as postmaster the post office was housed in his store on the southeast corner of the intersection.  When George Glaser became postmaster in 1901, his home served as the post office.  The Gumbo Post Office was discontinued in 1907 and mail was transferred to Chesterfield. Gumbo also boasted a restaurant, hotel, blacksmith shop, a doctor and St. Thomas Evangelical & Reformed Church.

The town of Centaur was founded in 1891 by Anton Leiweke at the intersection of Olive Street and Eatherton Roads.   It was situated on the Chicago, Rock Island and Pacific Railroad.  Leiweke founded the Centaur Lime Company with the aid of stockholders Jacob Theis, John Druhe and Frank W. Holtschneider.  Holtschneider became the first postmaster in Centaur.  He served from July 20, 1891 to January 8, 1900.  Four Leiwekes, Joseph, Leo, Otto and Frances, held the postmaster position from 1900 until 1959 when it was discontinued and transferred to Chesterfield.  According to Dan Rothwell, “Postmasters traveled by horse and buggy a 25 mile route which extended as far south as Fox Creek, west to Ossenfort Road and east to Pond Road.”  Besides the Lime Company and Post Office, Centaur (population 50) also had a railroad station, general store, blacksmith shop, lime quarry, hotel, lumber mill, St. Anthony’s Catholic Church, a one room schoolhouse and a stave factory. 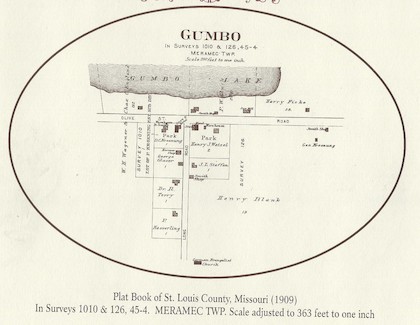