This website does not support Internet Explorer, We recommend Edge or Chrome.
City Home PageGovernmentBoards and CommitteesHistoric and Landmark Preservation CommitteeHistoric Families of ChesterfieldWalker Family

John Creamer Walker was born on 12 May 1861 in Slatington, Pennsylvania.  During his childhood, his family moved to Sedalia, Missouri.  On 17 February 1892, Walker married Jeanette (Jenny) Licklider and they had four children:  Hazel Walker Stemme; Helen Walker Fick; Ethel Walker Wilmas; and John E. Walker.  John C. Walker died on 7 September 1944 at the age of 83.  He is buried at Valhalla Cemetery in Bel Nor, Missouri.

John C. Walker worked for the St. Louis County Water Works for nearly 30 years and his son, John E. worked there for 47 years.

In 1902, the first organized water system in St. Louis County began on the Missouri River at Hines Station in Chesterfield.  This early water company offered a valuable service to St. Louis County residents as well as a variety of employment opportunities for men and women.  Men worked in construction or as machine operators, while women served as typist clerks, file and mail clerks and addressograph operators.  John C. Walker from the Sedalia, Missouri Water Company was hired by the St. Louis Water and Light Company to help build the plant and to serve as its first superintendent.  He had workers lay out the foundation for the first building with stakes and string. This building would house the pumps and steam boilers.  In 1904, he pumped water from the river through a 12 inch main for the first time.  The main line, which served 3000 customers, ran from Hog Hollow Road to Denny Road (now Lindbergh Blvd.) all the way to Kirkwood.  Walker also had the first stand tower built to store water.  Four years later, the company laid a 12.8 mile cast iron 12 inch main from the plant to Kirkwood at the cost of $101,293.50.  In spite of these successes, a labor shortage presented Superintendent Walker with one of his greatest challenges during the early years of the plant.

Due to Chesterfield’s sparse population, the company had to attract employees from as far away as St. Louis City.  However, commuting the 20 miles from the city was not feasible because there was only one train a day and a horse and buggy was to slow.  The Company’s solution was to build small homes across the road from the plant.  These homes were rented to the workers for $8.00 per month which included water and electricity.  In the 1930s, Chesterfield residents, such as Ott Biehle and Victor and Elmer Koester, were employed by the newly named St. Louis County Water Company.  By the time John C. Walker retired in 1931, the company was serving 33,000 customers.

Walkers’ son, John E. Walker, started working for the water company at the age of 12 years.  He was paid $1.00 per day to pull weeds.  After graduating from Ranken Trade School, he became a full-time employee.  When the company converted from steam to electricity in 1931, John E. transferred to the electric station where he worked until he retired in 1967.  At this time, the company had grown to 180,000 customers.

According to John E. Walker, the water plant used a generator from the 1904 St. Louis World’s Fair.  The St. Louis County Water Company provided water service and employment for Chesterfield and St. Louis County for over 100 years.  Some of the original buildings are still standing at the bottom of Hog Hollow Road. 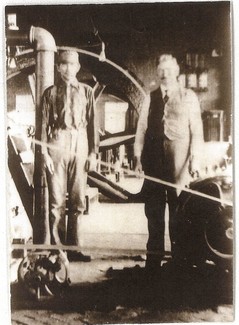 John C. Walker, on the right, was the Superintendent of the St. Louis County Water Company. Courtesy of John E. Walker.