This website does not support Internet Explorer, We recommend Edge or Chrome.
City Home PageGovernmentBoards and CommitteesHistoric and Landmark Preservation CommitteeHistoric Families of ChesterfieldGordon, George Family

George Gordon, an early pioneer of Chesterfield, was murdered as he stepped out of his house in 1809.  The killer, John Long, Jr. was tried and hanged in the first recorded murder west of the Mississippi River.  The crime occurred on Gordon’s Chesterfield property.

Gordon was born in Cumberland County, Pennsylvania on April 17, 1758 to Henry and Sarah Johnston Gordon.  He was the first of eight children and was well educated.  He enlisted in Pennsylvania’s Eighth Infantry Battalion in 1778 and was assigned to Captain John Jack’s 2nd company.  Later, Private Gordon served in Captain Thomas Johnston’s 6th company.  When he was discharged in 1782, he had reached the rank of corporal.

After the American Revolution ended, Gordon married Mary Prather (b. 31 Oct 1760).  They had two sons, Alexander and George, while living in Franklin County, PA.  On August 26, 1796, the Spanish Lieutenant Governor Zenon Trudeau granted Gordon 800 French arpents (arces) of land on Creve Coeur Creek.  Gordon was required to construct and operate a mill, which he located on the east side of what is now Highway 141 between Olive Boulevard and Ladue Road.  Antoine Soulard surveyed Gordon’s land grant on November 1, 1796.  George took possession as soon as the survey had been certified.  Gordon then sent for his wife and children and other friends and relatives from Pennsylvania.  These included his sister Elizabeth and her husband Dr. Samuel Smith and Thomas Johnston who was related to Gordon’s mother.  Gordon assisted the Smiths in obtaining a 450 arpent land grant on the north side of Clayton Road and employed Johnston as a tenant farmer.  By the fall of 1797, Gordon had a crop ready to harvest.  After President Thomas Jefferson purchased the Louisiana territory in 1804, Gordon’s sister Mary and her husband Thomas Mason moved to the area and purchased 400 arpents from Kincaid Caldwell.

Gordon’s wife Mary died in 1805.  By 1807, he owned two plantations, each with a mill and cultivated fields.  Creve Coeur Creek powered the mills which also powered Long’s Mill located on John Long, Sr.’s land grant. It bordered Gordon’s property.  By mid-October of 1808, John Long, Sr. died, leaving his wife Rachel and only son John Long, Jr. to battle the Land Commission for ownership of the Long property.  As a widow, Rachel was entitled to one-third of her husband’s estate, which included slaves to operate the mill.  All of Rachel’s property was transferred to George Gordon when he married her.  *John Long Jr., who had a wife and two small children, resented his mother’s marriage and the loss of the mill and some of his father’s slaves. During the next year, Long’s hatred of his step-father consumed him until he felt compelled to eliminate the problem.  On the morning of June 26, 1809, he shot Gordon with a rifle as he stepped out of his house.  Gordon, 54 years old, was buried next to his first wife Mary on his property.

On August 14, 1809, a grand jury indicted Long for first degree murder.  He was then tried, convicted, and sentenced to hang.  The execution took place on September 16, 1809.  In less than a year, Rachel Long Gordon lost two husbands and a son.

*Note:  An article in Chesterfield, Missouri: from Untamed Wilderness to Thriving Municipality and other sources claim that John Long Jr. was the son of Lawrence and Priscilla Long and that Lawrence Long only left John Jr. a pittance in his will.  Upon further research, John Long Jr. appears to have been the son of Lawrence’s brother, John Long Sr.  This would explain the junior after the younger John’s name and the small bequest left to him from Lawrence, his uncle. Also John Long Sr.’s property was close to Gordon’s land grant, thus making marriage to Rachel Long lucrative. Although John Long Jr.’s paternity is in question, his demise is well documented.

For more information about early Chesterfield families go to: 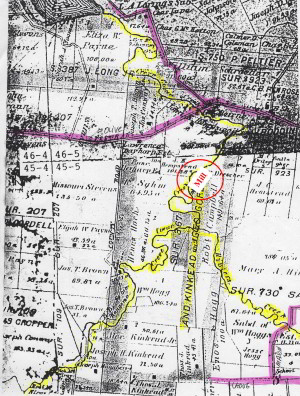 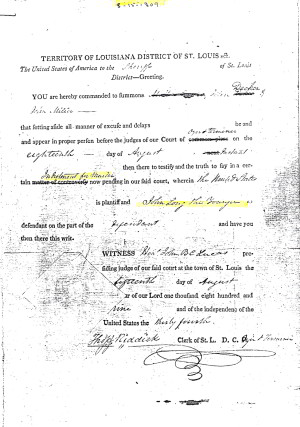