This website does not support Internet Explorer, We recommend Edge or Chrome.
City Home PageGovernmentBoards and CommitteesHistoric and Landmark Preservation CommitteeHistoric Families of ChesterfieldMissouri Statehood and the Chesterfield Connection: Part 2 Territory to State

Missouri Statehood and the Chesterfield Connection:  Part 2 Territory to State

After the United States acquired the Louisiana Territory in 1803, the area of Missouri moved rapidly from wilderness to civilization.  On March 3, 1805, President Jefferson made St. Louis the seat of government for the territory. Brigadier General James W. Wilkerson was appointed Territorial Governor and Frederick Bates, who settled in Chesterfield in 1818, was given the position of Secretary of the Louisiana Territory.  Bates also served as Acting Governor during Wilkerson’s absences.  The territory was soon divided into Upper Louisiana with the southern border at 36 degrees of north latitude, which became the southern border of Missouri and the northern border of Lower Louisiana.  Congress also passed legislation honoring land claims (Spanish Land Grants) made before October 1800.  All claims made after this date had to be vacated.  This policy caused a tremendous outcry by Missouri residents led by August Chouteau and other St. Louis elites.  Richard Caulk of St. Andrew (Chesterfield) was one of the nineteen signers of a “memorial” addressed to the U.S. Congress asking that all rights under the former Spanish rule be recognized.  Congress then decided that all claims would be considered.  Following this success, Missouri made swift political and economic progress.

The Corp of Discovery (Lewis & Clark Expedition) returned on September 23, 1806 to contentious land claims raging around St. Louis and Ste. Genevieve.  President Jefferson quickly replaced the unpopular Governor Wilkerson with Meriwether Lewis and William Clark was promoted to Brigadier General in command of the territorial militia as well as Indian Agent for all tribes except the Osage.  This tribe dealt with Pierre Chouteau.  Frederick Bates was appointed Secretary, Recorder of Land Titles and a member of the Board of Land Commissioners.  Lewis tended to shirk his duties, leaving Clark and Bates to take on his responsibilities.  However, Lewis did encourage Joseph Charless, a printer and Irish rebel, to establish the first newspaper in Missouri, the “Missouri Gazette” in 1808, located in St. Louis.  The next year as Lewis was traveling to Washington City (D.C.), he stopped for the night in Tennessee.  The following morning. October 2, he was discovered dead of an apparent suicide.  Frederick Bates once again served as Acting Governor until the new appointee, Benjamin Howard arrived.

Earthquakes shook Missouri on December 16, 1811 and again on February 7, 1812.  The epicenter was around New Madrid, but was felt as far away as the U. S. capitol.  Ground along the Mississippi River cracked, landslides ensued, some structural damage occurred in St. Louis, a whole Native American village near New Madrid disappeared and Reelfoot Lake near Taptonville, Tennessee was created.  On June 4, 1812, the Territory of Louisiana became a state and Upper Louisiana became the Territory of Missouri.  The following year, William Clark was named governor.  By 1817 roads were still poor, but steamboat travel along the Mississippi River began.  Better transportation aided Missouri’s economic development which was based on agriculture, fur trading, mining and land speculation.  Other industries included metalworks, woodworking and brick making.  The first ironworks developed near Ironton, Missouri around 1815 or 1816.  These industries led to commerce which created a demand for capital.  To help with the latter, August Chouteau and Manuel Lisa (Chouteau’s son-in-law and a well-known fur trader) founded the Bank of St. Louis in 1816.  Justus Post, a Chesterfield resident, served on the Board of Directors.  He also served as a judge in the St. Louis County Court system and as a State Senator.  The Bank failed in the Panic of 1819.  Choteau and Lisa then opened the Bank of Missouri which also failed for lending money without the backing of hard currency.  In spite of these failures, Missouri continued to progress.

In 1818, the Territorial Legislature submitted a formal request to Congress for Missouri Statehood.  However, slavery quickly became an issue, which was finally settled by the Missouri Compromise on March 6, 1820.  The U. S. Congress banned slavery in the Louisiana Territory north of 36” 31’, the southern border of Missouri.  In spite of this ruling, Missouri was allowed to enter the union as a slave state and Maine came in as a free state.  This maintained an equal number of slave and free states in Congress.  Two months later, Missouri elected representatives to a state constitutional convention.  All of the representatives were white, wealthy businessmen or lawyers.  Frederick Bates, and his uncle Edward Bates, were two of the forty-one representatives at the convention. On July 19, 1820, a Missouri Constitution was adopted.  President James Madison admitted Missouri into the United States as the 24th state on August 10, 1821.  A temporary state capitol was set up in St. Charles.  Alexander McNair was elected the first governor of Missouri and he soon designated the site for the City of Jefferson to become the permanent capitol.  The state government moved to its new home on October 1, 1826.  Frederick Bates was elected the second governor in 1824.  He lived on his Thornhill estate in Chesterfield and commuted to St. Charles by horseback and ferry.  He died of pleurisy in 1825, nine months after taking office.

The centennial of statehood was celebrated throughout Missouri in 1921 with banners, a commemorative coin and a new state fair grounds in Kansas City.  The bicentennial of Missouri’s statehood in 2021 will also be a time of remembrance, reflection and celebration.

For more information go to  http://www.chesterfield.mo.us/historical-commission.html 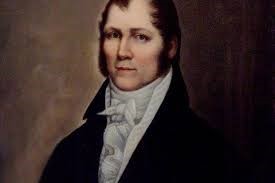