This website does not support Internet Explorer, We recommend Edge or Chrome.
City Home PageGovernmentBoards and CommitteesHistoric and Landmark Preservation CommitteeHistoric Families of ChesterfieldBrueggeman, Erwin Family

Erwin and Anna Eckelman purchased 100 acres in the Gumbo Bottoms, now known as “the Valley”, and moved their family to the farm in 1942 when daughter  LaVerne was in the 7th grade. The farm was operated under the name Eckelman Farms until 1980.The family had previously raised vegetables in the Sappington area of South County and also North County. Their farm was on the north side of the present Chesterfield Airport Road, which was then U.S. Highway #40/61, a 3 lane highway back in the day. The farm was divided into 2 pieces with the construction of the new highway which is now interstate #64; the farmhouse north of the new highway and fields on both sides.

The first crop grown on the farm was Irish Potatoes but a flood that year submerged the fields just as the crop was ready to be harvested and all the potatoes rotted in the soil. Erwin would never allow a potato to be grown on the farm after that. LaVern remembers needing to get into a boat from the back door of the house to get to the one room school located at the “Wedge”. She later attended Eureka High School since there was no high school in the Chesterfield area. This required a long bus ride each day with a strict driver, who didn’t allow any talking between the boys on the long bench seats on one side of the bus and the girls on the opposite side.

The “TNT” plant was in operation as WWII was in need of all the explosive material as could be manufactured. The 3 lane highway to the plant was responsible for many head-on collisions when 2 drivers going in opposite directions tried to pass at the same time. LaVerne remembers doing clothes shopping in either Wellston or Maplewood. There was nothing closer except a small store in Hog Hollow called Zierenbergs Merchantile. Grand events meant shopping in downtown St. Louis. Groceries were available from Glasers Mercantile at the corner of Long Road and Highway 40/61. If you wanted a larger selection, you traveled to Clarkson and Manchester Roads at Grazaks Grocery.

The farm expanded to 380 acres by adding leased land and a variety of vegetables were then grown including Chinese cabbage, cabbage, turnips, peppers, eggplants, tomatoes, corn, sweet potatoes, zucchini squash, acorn squash, yellow and white squash, pumpkins, watermelons and cantaloupe. A retail market was built along Olive Street Road and produce was trucked to the wholesale market in St. Louis. Extra help was obtained by getting German war prisoners from the Hellwig Brothers Camp. They were always hungry when they arrived, so LaVerne and her mother made many egg sandwiches to nourish them so they could work harder.

A distant relative who lived in East St. Louis started to work on the farm on weekends and summers. His name was Richard Brueggman and he traveled by bus and street car from East St. Louis where he was attending high school. The last bus stopped at Gumbo so the final mile or so was by foot.

Rich and LaVerne were married in 1951 and had 2 children who were schooled at the Chesterfield Elementary School on Wild Horse Creek Road. The Missouri River had a record flood in 1951. The Monarch levee with the hard work of many people was the only levee between Kansas City and the Mississippi River that was still intact when the water receded. The river was high for such a long time that the growing season was cancelled because of seep water. To keep some employed, Erwin Eckelman in 1951 constructed a service station leased to Standard Oil Co. Two local brick layers helped with the construction. At this time some green houses were built to replace the old fashioned “hot beds”.

Vegetables were retailed at the roadside market 7 days a week. Also. produce was delivered to a warehouse in East St. Louis to the A & P supermarket chain and also to the wholesale produce market 5 nights each week.

The farm lost a wide section of land taken for the construction of highway 40/61 which is now interstate #64. This required a long trip with farm equipment to reach parts of the farm on the north side of the new highway.

More greenhouses were constructed and the floral and vegetable plant business was expanded, both retail and wholesale. The farm land turned to grain production.

Church membership was with the St. Thomas United Church of Christ on Long Road whcih has since moved on to Wild Horse Creek Road. The church has always taken the responsibility of maintaining the small graveyard on Long Road by the railroad crossing even though the church has no ownership of the graveyard property.  After the Civit War the original owner of the land buried a soldier who died there on his way home from the war and a portion of the land was dedicated for a graveyard for all in need of a final resting place.

Anna Eckelman sold the farm in 1980 and moved to Friendship Village where she resided until her death 10 years later.

LaVerne and Rich had a home on Wild Horse Creek Road until 2003 when they moved on to their retirement at Chesterfield’s Friendship Village. 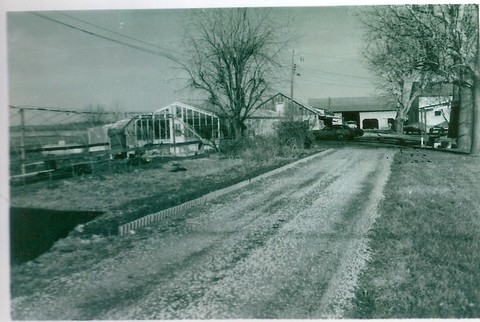 Buildings on the Eckelman/Brueggeman farm.  Courtesy of LaVerne Brueggeman

Source
Written by Rich Brueggeman in June 2016 and edited by Lynne Johnson,CHLPC