This website does not support Internet Explorer, We recommend Edge or Chrome.
City Home PageGovernmentBoards and CommitteesHistoric and Landmark Preservation CommitteeHistoric Families of ChesterfieldWilmas Family

The Wilmas family members were active Chesterfield farmers as well as participants in St. Louis County government.  The parents of Anton Wilmas emigrated from Germany to the United States in the late 1830s.  Toward the end of 1848, they moved to St. Louis County with their three year old son, Anton (1845-1921).  On 31 January 1871, Anton married Louise Reinke (b. 6 Jan 1853, d. 10 Nov 1925).  She was the daughter of John Dietrich Reinke (1821-1910) and Luise Wilhilmine Kleinsorg (1828-1883).  Dietrich Reinke was one of the original Ballwin, Missouri pioneers.  He owned a farm on Clarkson Road where Louise and her two brothers and four sisters grew up.

Anton’s third son, Albert August (b. 4 Nov 1870, d. 15 Jan 1949) was the first Wilmas to live in Chesterfield.  He married Amelia Schag (b. 24 Aug 1875 in Orville, MO, d. 6 Dec 1939) on 18 March 1898.  They spent the first years of their marriage in Ellisville, Missouri.  In 1906, Albert purchased hill property located near Wild Horse Creek Road and Santa Maria Drive on which he built a house and barn overlooking the City of Chesterfield.  Albert served as director of the Chesterfield School Board and was active in Republican politics for more than 30 years.  In 1913, he was elected Judge of the County Court from the Second District.  Two years later, he became a Collector of Revenue for St. Louis County.  He served two four-year terms from 1915-1923.  The next year, he was elected County Sheriff and served until 1928.  After leaving public office, Albert Wilmas spent the next twelve years cultivating his farm land in the Missouri River Bottoms.  He became known as one of the largest potato growers of the area.

Albert and Amelia had two children:  Clifford Albert (b. 20 Nov 1899, d. 18 Nov 1989) and Vervivon Regina (b. 9 Aug 1902, d. ?).  Clifford attended Chesterfield School and Mrs. Griffith’s Sunday school class at the Chesterfield Baptist Church.  Both were located on Wild Horse Creek Road.  He married Ethel Jo Walker (b. in Lake, MO, d. 3 Sept 1977) on 27 November 1924.  Cliff became a well known Chesterfield farmer.  He acquired the 225 acre Charles Andreas’ farm.  Like his father, he grew many acres of potatoes.  He also produced corn, cantaloupe and wheat.  After several years of drought and floods, he retired from farming.  For a time, he worked as a deputy tax collector for Willis Benson in the St. Louis County tax collector’s office in Clayton, Missouri.  In 1974, he took a part-time position at the Washington University Tyson Research Center, where he worked until his death in 1989.

Some of the Wilmas family is buried in St. John’s Lutheran Cemetery in Ellisville, Missouri and others are buried in Bellerive Heritage Gardens in Creve Coeur, Missouri.  The Wilmas’s provided food and services to Chesterfield and the wider community. 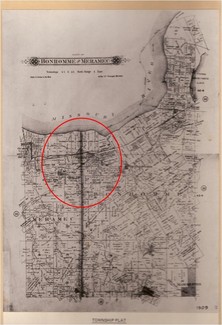 1909 Map of Bonhomme and Meramec Townships. Courtesy of CHLPC