This website does not support Internet Explorer, We recommend Edge or Chrome.
City Home PageGovernmentBoards and CommitteesHistoric and Landmark Preservation CommitteeHistoric Families of ChesterfieldGiddings, Rev. Salmon

In the early nineteenth century, Reverend Salmon Giddings was instrumental in spreading the Presbyterian faith along the Mississippi River in Illinois and Missouri.  He also spent time preaching in the Chesterfield area.  Giddings was born in Hartford, Connecticut on March 2, 1782.  He attended Williams College and Andover Seminary, where he was ordained as a Presbyterian minister on December 20, 1814.  The Connecticut Missionary Society sent him to the Missouri territory in 1815 to serve as an itinerant missionary because he was proficient in the French language.  Giddings became a well-known, much loved and successful preacher in Eastern Missouri.

Reverend Giddings arrived in St. Louis In 1815, where he was engaged by the Reverend John Peck of the Baptist Church of St. Louis to teach school with the assistance of Miss Mary L. Elliot.  On the Sabbath, he used his classroom to preach.  On July 21, 1816, he celebrated the Lord’s Supper with Mr. Thomas Osberne, Mr. Stephen Hemstead (a noted St. Louisan) and Mrs. Mary Lisa, who was the daughter of Hemstead and the wife of Manuel Lisa, a well-known fur trader.  However, most Sundays found Giddings riding the circuit and visiting settlements and villages along the Mississippi River.  On August 12, 1816, his travels took him to Bellevue Valley, 10 miles south of Potosi, where he organized the first Presbyterian Church west of the Mississippi River.  From Bellevue, Giddings journeyed south to Cape Girardeau, then north to Ste. Genevieve.  During his circuit, he preached, baptized, prayed with families, and searched for persons who had been members of the Presbyterian Church.  As he spread the Gospel of Christ, he also distributed Bibles.

On June 30, 1816 Reverend Giddings visited Joseph Conway in Bonhomme Township (Chesterfield) where he preached.   Conway and his neighbor Elizabeth Smith, widow of Dr. Samuel Smith, had been having Sabbath meetings in their homes and hoped to acquire a permanent pastor.  Their hopes became realty on October 4, 1816 when Bonhomme Presbyterian Church was officially organized with Reverend Salmon Giddings presiding.  The Bonhomme congregation’s first church structure was built of logs in 1819.  Fire destroyed it ten years later.  A new stone church was completed in 1841, which still stands on Conway Road.

In December of 1817, the churches of Bellevue, Bonhomme and St. Louis, represented by Reverends Timothy Flint, Salmon Giddings and Thomas Donnel, held its first meeting of the Presbytery of Missouri.  This had been formed by the Synod of Tennessee earlier in the year.  A few months later, Giddings installed Thomas Donnel as pastor of the Bellevue Church.  Giddings has been credited with founding six Presbyterian churches in Illinois and six in Missouri.

In 1825, Giddings resigned from the Connecticut Missionary Society and accepted the position as pastor of the First Presbyterian Church of St. Louis.  With his itinerant lifestyle now behind him, he was ready to marry and start a family.  Almira Collins (1790-1872) became his wife in 1826.  Unfortunately, Giddings did not live to see his son born.  He died on February 22, 1828 at the ae of 45.   According to Terry Wunderlich, a descendant of Joseph Conway, Giddings was originally buried beneath the pulpit of the First Presbyterian Church of St. Louis.  When the church was razed in 1873, his remains were moved to the Bonhomme Church Cemetery where he rests today.

Reverend John M. Peck, pastor of the Baptist Church of St. Louis and Giddings’ first employer in Missouri, best summed up Giddings the man.  He said that Giddings was “the most quiet, patient, plodding, self-denying and faithful missionary the Presbyterians or Congregationalists ever sent to this country.” For more information see http://www.chesterfield.mo.us/historical-commission.html. 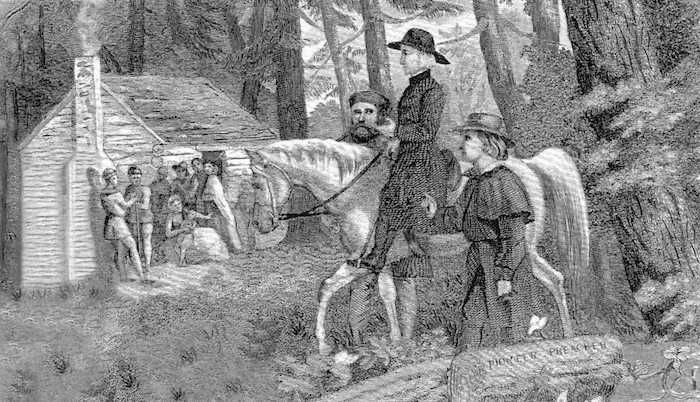