This website does not support Internet Explorer, We recommend Edge or Chrome.

Farm houses in agrarian Chesterfield had many similarities as well as some differences.  Most were at least two stories with dormer windows, while many had a third story attic used for storage or additional sleeping space.  White clapboard was the typical building material, although a few were constructed of brick.  Many of the houses sported a large veranda or porch across the front, but a few had only a small stoop.  The architecture was the major difference among these homes.  While some were designed in the classic rectangle style, others were L-shaped, and some had a two-story rectangle with a single-story wing on either or both sides.  Some began as small log cabins which were expanded over time.  The homes of Governor Bates and Charles Stemme were examples of such structures.  Some houses, like those of Edward Burkhardt and Herman Stemme, were large and imposing, while others were quite modest in size, like the Tyler home.  All of these houses, however, offered a safe and comfortable place for hard working Chesterfield farmers to take their brides and to raise their children.

For more information about the families who lived in these houses see http://www.chesterfield.mo.us/historical-commission.html or visit the Chesterfield Heritage Museum at Chesterfield Mall near Macy’s. 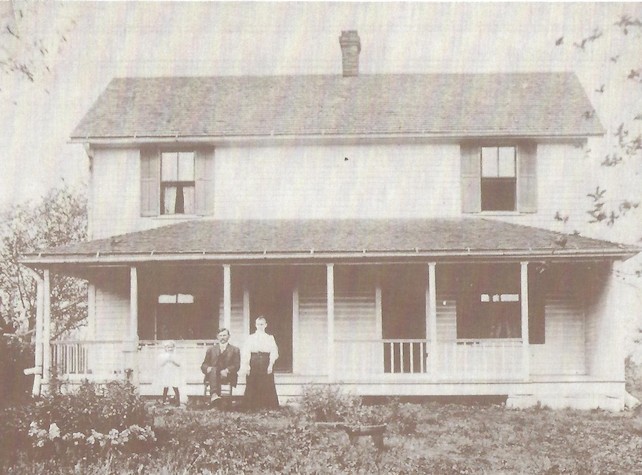 Albert and Letie (DeFoe) Schmitz’s first home was built in 1896 on the west side of Wilson Road.  It became the home of their daughter, Ruby, after she married James Zumalt in 1936.  L to R:  Ruby, Albert and Letie. It was sold in 1986, then torn down in 1988 to make space for the Wilson Manor Subdivision.  Courtesy of Ruby Schmitz Zumalt