This website does not support Internet Explorer, We recommend Edge or Chrome.
City Home PageGovernmentBoards and CommitteesHistoric and Landmark Preservation CommitteeHistoric Families of ChesterfieldSchool, Bonhomme

One-room schoolhouses were common in the Chesterfield area during the 19th and early 20th centuries. Four of the five villages which became part of modern day Chesterfield had their own one-room schoolhouse and each school bore the name of the village – Lake, Bellefontaine Chesterfield and Bonhomme.  Residents of Gumbo sent their children to either the Chesterfield or the Bonhomme School.  Besides these four community schools, early Chesterfield also had the Chesterfield School for African American students and two church schools – Bonhomme Presbysterian and Ascension Catholic Churches.   The church schools were housed in the church basements, while the community schools were free-standing structures.  Many common features existed among these schools.  Each had only one room with a wood-burning stove in the center.  They employed only one teacher who taught grades one through eight.  Each school had a chalk board and teacher’s desk in front of the room, some type of desks for students, and individual slates on which the students practiced their writing and math.  By the mid 1950s these small schools were absorbed into the Parkway and Rockwood School districts.
The oldest school in the Chesterfield area was the Bonhomme School, located at 18455 Olive Street Road.  According to Garlin Kellison, the last principal of the school, it was first built around 1812 of rough hewn logs.  It was initially built by the village of St. Andrew along the Missouri River on the north side of the Daniel Boone Bridge.  When the community was destroyed by the 1844 flood, Bonhomme Village along Old Olive Street Road, south of the bridge, took over the school.  Around 1870 a one room brick building was erected.  In five years the enrollment had out grown the space, so the brick building was dismantled and replace with a larger frame structure.  In 1934, a CWA (Civil Works Administration) project razed the building, dug a basement to house a furnace and replaced the structure with additional windows and electricity. On May 26, 1951, the last class graduated from Bonhomme School.  Later the building became the Old Schoolhouse Tavern which operated until the building was damaged in the 1993 flood.  It was razed in 1998.  The bell tower is now displayed at a Rockwood school in Eureka.  Robert Stanton, a former official of the Rockwood School District, claimed Bonhomme School was “the finest example of a rural one-room school” he had ever seen.
Many of the Bonhomme School graduates made their mark in the world as merchants, salesmen, barbers, lawyers, stenographers, secretaries, farmers, homemakers and teachers.  The following became teachers:  Lottie Boissellier, Nora Kroenung Bayer, Mary Sutton Bayer, Rose Sutton Coleman, Dorothy Broemmelsick Rankin, Margaret Corless Rickard and Garnet Schaeffer Glaser.
Garnet Schaeffer (1908-1995) graduated from Bonhomme grade school in 1921 where Miss Jordan was the teacher.  She graduated from Clayton High School in 1925, and then attended Harris Teacher College in St. Louis where she received her teaching certification.  She returned home to teach at the Chesterfield School for one year, then at the Bellefontaine School for the next seven years.  These schools will be discussed in future articles.  According to Hope Sellenreik Stemme, who attended Chesterfield School, Garnet, unlike most female residents of Chesterfield in the 1920s and 1930s, drove a machine (automobile).  Garnet left teaching when she married Roy Glaser.
The fathers of most of the students in all of Chesterfield’s one-room schoolhouses were farmers, many of whom served on the school board of directors.  In William Thomas’1911 book, History of St. Louis County, he listed the members of the Bonhomme School Board.  These were Domain Mueller, president, William Schulze, clerk, W. E. Sutton, director and Ernest Albrecht, director.  Obviously parents considered education to be very important and the schools held a significant position in the various Chesterfield communities. 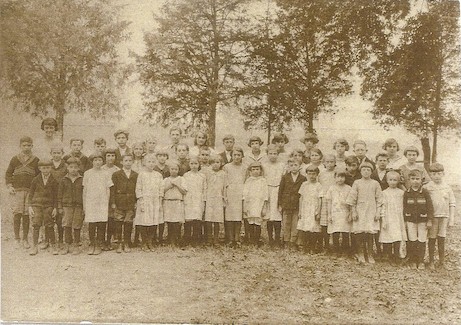