This website does not support Internet Explorer, We recommend Edge or Chrome.
City Home PageGovernmentBoards and CommitteesHistoric and Landmark Preservation CommitteeHistoric Families of ChesterfieldHistoric Photos - Weddings

White wedding gowns were occasionally worn by wealthy European brides prior to 1840.  However, the practice did not become popular among middle- and working-class brides until after the wedding of Queen Victoria of England.  Victoria proposed to her first cousin, Albert, Prince of Saxe-Coburg and Gotha, and she chose the color and material for her bridal grown.  She insisted on white Honiton lace from Devon, England instead of the more fashionable Brussels lace and white Spitalfields silk from East London.  Her choices made a big impression at her wedding on February 10, 1840.  English, European, and American brides quickly emulated her. Nevertheless, the white bridal gown did not make an appearance in Chesterfield, Missouri until the end of the 19th century. Many Chesterfield brides continued to be married in dark colored dresses with long veils or large hats until the 1920s when white became the norm.  Although the color white became popular, the style for wedding gowns changed drastically from one decade to the next.  However, all gowns between 1880 and 1960 tended to have high necklines and long sleeves.  Chesterfield grooms wore dark suits or black tuxedos as their wedding outfits.  Most early Chesterfield weddings were between area families as is evident in the photos below. They tended to be held in the bride’s home or in one of the local churches. For more information about Chesterfield families go to,  http://www.chesterfield.mo.us/historical-commision.html or see CHLPC publications available for purchase at Chesterfield City Hall or at the Chesterfield Heritage Museum at Chesterfield Mall. 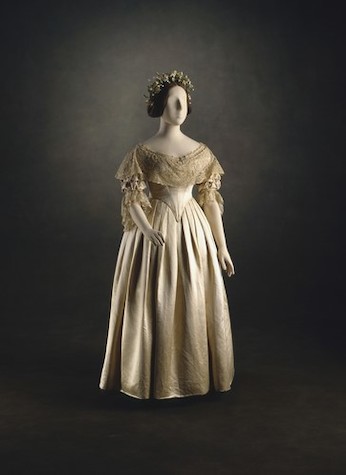 Queen Victoria’s wedding dress, 1840.  She wore the lace flounce for her children’s christenings, her diamond jubilee portrait, and for her son Leopold’s wedding.  The gown is now kept in storage.