This website does not support Internet Explorer, We recommend Edge or Chrome.
City Home PageGovernmentBoards and CommitteesHistoric and Landmark Preservation CommitteeHistoric Families of ChesterfieldTomschin, Rudolph Family

Rudolph F. Tomschin was born in Germany on 4 June 1880.  His wife Emma E. was born in the United States on 14 January 1886.  They settled on a 200 acre farm located on the west side of North Woods Mill Road between Ladue Road and Forest Ridge Subdivision.  Greentrails Subdivision, Parkway Central High School and Parkway Middle School now stand where the Tomschin farm once flourished.

The Tomschins had thirteen children:  Fred, Sadie (1909-1992), Henry, William (1919-1992), Rudolph, Emma, Ida, Pearl, Grace, Della, Ruth (1926-?), and two who died at birth.  The children attended Lake School and the family shopped at Zierenberg’s and Rinkel’s Markets.  They were active members of the Parkway Evangelical and Reformed Church on Ballas and Conway Roads.  The Tomschins held family gathering and celebrated Thanksgiving and Christmas with the extended family.

Rudolph Tomschin, the family patriarch, used mules, which had the reputation of being mean, to pull the farm implements.  In the 1940s, the original farm house was torn down and a new brick home was constructed.  After Rudolph died on 10 June 1954, his wife Emma and their daughter Sadie continued to live there.  They gradually sold off all but one acre of land.  In the 1960s their large barn was demolished.  The remaining property was sold after the deaths of Emma in 1968 and Sadie in 1992.

The Tomschins’ oldest son Fred married Elsie Fink in the Parkway E & R Church.  In the early days of their marriage, they lived on Old State Road, but later they moved to a farm on Conway Road and Highway 141 where Maryville University is now located.  Fred, who was an excellent carpenter as well as a farmer, built a new home on the site.  When Fred and Elsie were children, he attended Lake School in the Chesterfield area, while Elsie and her seven siblings attended the Locust Grove School at Mason and Ladue Roads.  Both were one room school houses and Elsie’s teacher was Mrs. Schnieder.

During World War II, Fred served in the army and was stationed at Fort Leonard Wood, where Elsie worked as a pastry chef.  When they returned to Chesterfield, Fred loaded dump trucks at the POW camp in Chesterfield and Elsie cooked for the camp. She also worked at St. Louis Lambert Airport for Curtiss Wright as a riveter on airplane wings.  Fred and Elsie had a daughter Joan Tomschin Atkinson.

Rudolph, Emma and their children Sadie, William and Ruth are buried in the St. John’s United Church of Christ Cemetery on Olive Boulevard. 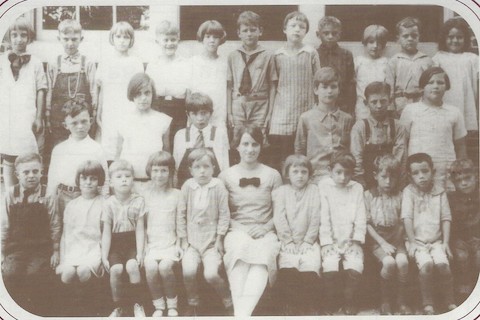