This website does not support Internet Explorer, We recommend Edge or Chrome.
City Home PageGovernmentBoards and CommitteesHistoric and Landmark Preservation CommitteeHistoric Families of ChesterfieldConway Family
By Ann Chrissos

Conway Road begins at Swingley Ridge Road in Chesterfield and travels east to Clayton Road in Ladue.  It was named for two brothers, Samuel and Joseph Conway, Jr., who were born and lived in Chesterfield. They were active in the 19th century politics of St. Louis County and the state of Missouri.  Both served as sheriff of the St. Louis County Court and held a seat in the General Assembly of Missouri.  Joseph, Jr. also served as associate justice, second district.  In Chesterfield he is remembered for donating land diagonally across Conway Road from his house for the stone construction of the Bonhomme Presbyterian Church in 1841, which continues to stand today.  However, it was their father, Joseph Conway, Sr., who was one of the original founders of the Church and the true Chesterfield pioneer.

In 1796, Joseph, Sr. brought his wife Elizabeth Caldwell Conway and their three children to Bonhomme Township (part of Chesterfield today), settled on a 400 acre Spanish land grant and became one of the earliest families to call Chesterfield home.  They built their pioneer home near present day Conway Road and White Road where they established a farm and had seven more children.  Joseph was born in Greenbrier County, Virginia on 14 December 1763 to John Conway from Ireland and Elizabeth Bridgewater Conway from England.  Joseph’s family moved to Kentucky when he was 12 years old and settled at Ruddles Station (a fort).  During the American Revolution the fort was attacked by British soldiers and their Indian allies.  Young Joseph, while attempting to drive off the Indians, was caught, tomahawked, scalped, and left for dead.  His injuries were treated by an old lady named Mrs. Wiseman who staunched the blood flow with cobwebs and nursed Joseph back to health.  He gradually recovered as the British marched the captured Americans to Detroit.  The Conway family was detained by the British for the next four years.  After returning to Kentucky, Joseph joined Generals Harmer and Wayne in their numerous campaigns against the Indians.  He was scalped three more times as he strove, along with Daniel Boone and many other brave young men, to secure the land east of the Mississippi River.  When this land was relatively safe for Americans to inhabit, the adventurous Conway and Boone journeyed to untamed Missouri, where they cleared and cultivated their Spanish land grants.
After the Louisiana Purchase in 1803, President Thomas Jefferson asked Joseph Conway, Sr. to command the exploration of the Missouri River and beyond.  Conway declined the appointment in order to care for his family, but he did offer his blessings and good wishes to Lewis and Clark as they embarked on a 1600 mile journey in May 1804.   During the War of 1812,  Conway was once again called to serve his country against the British.  When the war ended in 1815, Joseph returned to his farm where he lived until his death on 27 December 1830, at the age of 67.
Joseph Conway, Sr. is considered to be one of the bravest and noblest men who ever lived in the State of Missouri.  He and his descendants continue to be honored today by the many streets and subdivisions which bear the Conway name. 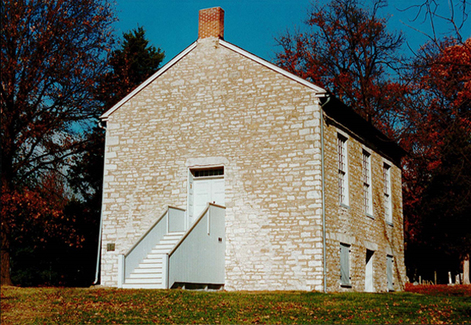 These items are available at the Chesterfield City Hall, 690 Chesterfield Parkway West.  Finally, speakers on the above subjects for adult and youth groups can be arranged by calling 636-537-4000.